Sandra C. Fernández was born in New York but grew up in Ecuador. Since a very early age, she crossed between worlds, negotiated her identity as a North and South American female, and had a sense of being ni de aquí, ni de allá (belonging neither to here nor there). In interviews throughout her career, Fernández has expressed that her work explores the meanings of her personal narrative as she grapples with her past, yet, she also wants to go beyond the personal. Through the very materiality and intimacy of her works, she invites viewers to enter into narratives fraught with pain, loss, and sorrow, as well as possibilities for hope, justice, and transformation. Issues of dislocation, socio-economic-geographic mobility, struggles with asymmetrical systems of power, intersectionality, sexism, trauma, political freedom, identity, are all present in her oeuvre. Fernández explains, “My art is the record of my personal experience as an immigrant, mother, and Latina. I understand all art to be a personal aesthetic mediation. Mine includes a prolonged engagement with pain and deracination but also with pleasure, self-fulfillment and community engagement. Like most humans I have experienced trauma, loss, and loneliness, as well as the intense love of community and family. My art has sought to capture these feelings throughout my life using various techniques and materials.”[1] 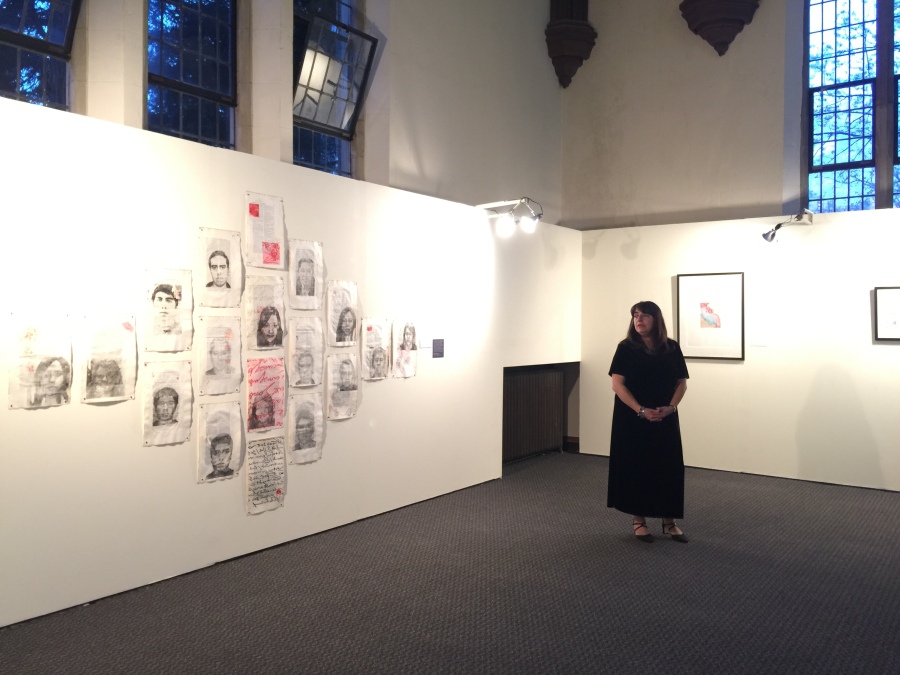 Fernández received an MA (1992) and MFA (1995) from the University of Wisconsin at Madison and is currently the Director of the Printmaking Center of New Jersey. Her works have been widely exhibited and collected in cities in the US and abroad including New York, Chicago, Dallas, Toronto, Brooklyn, Berkeley, Buffalo, Baltimore, Quito, Buenos Aires, Granada, Michoacán, Cuernavaca, Bogotá, Palestine, Barcelona, Bali, Kyoto, Hang Zhou. The artist’s work also integrates the collections of the Smithsonian American Art Museum, The San Antonio Museum of Art, Mexic-Arte Museum, The Museo de la Casa de la Cultura in Quito, Ecuador, The Art Museum of South Texas, the Biblioteque Nationale in Paris, The Texas Tech Museum in Dallas TX, the Kohler Art Library and the Gilberto Cardenas collection of Latino Art. Most recently the book- catalog S. Fernández: La memoria del mestizaje/ The memory of mestizaje (1990-2012), a retrospective of her work, was published by the Museum of La Casa de la Cultura Ecuatoriana.

In spite of her outstanding international career, Fernández’s art remains intimate and familiar, as though zigzagging poetic gestures in an attempt to rewrite and reweave narratives that have been deshilvanadas—“un-weaved,” so to speak—as these subjects have attempted to cross between worlds and between the borders of Mexico and the US. Her current exhibition Crossings/Mojándose, in view at CARE’s Doug Adams Gallery until May 27th is filled with poetic gestures that weave fugitive identities with strategies of resistance.[2] It has received several visitors who describe her work as being impactful, powerful, moving and igniting important discussions that are particularly relevant to our current political situation. “My work during the last few years,” she explains, “has reflected issues related to migration across the border with Mexico into the U.S. As a Latina who lived in Texas for many years, I was constantly exposed to both the lived experience and the rhetoric about “illegal migration.” I often came across the undocumented: on the streets; in stores; in entire neighborhoods in Austin, where Spanish was the only language spoken or understood. […] These encounters have influenced my latest work, which explores the phenomenological aesthetics of the undocumented.”[3]

At once private and collective, Fernández’s artworks invite us to look while being looked at. In this reversal of spectatorship, of being the subject of young brown immigrants’ gaze, we are asked to reconsider our judgments, assumptions, prejudices, and intolerances so as to find our capacity for solidarity. Fernández’s works also invite us to develop an ethics of testimony where we become implicated in the stories and experiences of displacement, erasure, and violence. By activating her work with stitches, punctures, holes, perforations, and prints of the faces of the forgotten, Fernández inverts contemplative aesthetic relations to summon our bodies and minds to respond phenomenologically to this aesthetics of the undocumented. She powerfully maps the cartography of these “internal exiles,” as Rita Riley would put it, and breaches the usual aesthetic distance expected from spectators, artworks, and subject matters. She weaves our memories and narratives with the narratives of the displaced. As an audience, we are uncomfortably connected to their stories, their present, and future condition.

In her work Caution, Dreamers in/on sight, Fernández incorporates a problematic caution sign, which was introduced in San Diego highways in the early 1990s, intended to warn drivers about immigrants trying to “illegally” cross highways. In the image, a family is depicted running. The illustration was supposed to replace the wordy cautionary sign which read “Caution—Watch for people crossing the road.”As the operation GateKeeper and the construction of the Iron Curtain took shape, this sign became a cultural icon and appeared on T-shirts and anti-immigration advertisements. The operation GateKeeper was a measure implemented by the U.S. Border Patrol in the 90s aimed at stopping illegal immigration at the United States/Mexico border, near San Diego, California. The Caltrans graphic artist, a Navajo Vietnam War veteran, John Hood, created the image as an assignment in response to the sharp rise in immigrant traffic deaths.[4]

Chicanx studies scholars were outraged at the image of an “undocumented family on the run.” To them, the image functioned as a badge of anti-immigrant response, further reducing the plurality and the degrees of complexities around patterns of migration to a single image of a hetero-normative and faceless family. Some Latinxs were insulted that the silhouettes reminisced animal crossing signs. Anti-illegal immigration advocates were angry that a state agency was seemingly trying to protect people who had broken the law. Some people feared the signs would be misread as indicating safe places to cross.

Fernández’s title—Caution, Dreamers in/on sight unleashes a semiotic shock: these are not people to be feared as “others.” They are dreamers such as any human being! As art historian and art critic Rita Riley explains, borderland works, not only problematize issues of immigration but also of securitization of borders, and the “disparity between mobility of capital and the immobility of people […] While goods freely circulate between borders with free trade agreements, the walls and fences continue to prohibit the circulation of people… Market ideologies of liquid, free-flowing capital and open borders for commodities come up against new policing tactics to regulate the movement of people.”[5] By rejecting this logic, Fernández’s work seeks to make these faces and real—faces that were, on many occasions, “de-realized.” The faces of these immigrant students force us to ask ourselves whose lives remain real and whose lives have suffered the violence of derealization. “Excluded from the category of the human real and from life that deserves to live,” Butler explains, “the migrant nevertheless lives on, returning to haunt the very site of its exclusion.”[6]

In significant ways, Fernández’s oeuvre is also aligned with contemporary art in Central and South America that sought to denounce different efforts of colonialization, particularly through totalitarian military regimes that shattered democracy in many American countries midway through the 20th century. These regimes, as Nelly Richard puts it, instituted a culture of fear and violence that enforced obedience and control through prohibition, persecution, torture, and censorship. One of the most coercive strategies totalitarian regimes have at their disposal is the effacement of narratives—extermination of stories that interlace identities, persons, bodies, their struggles, and triumphs. Some of the art created during these regimes combated such realities by invoking and allowing silenced voices, fragmentation, trauma, as well as outbursts of history, memory, and identity to emerge. This transgressive and feminine art created a language to speak of fractures, fissures and wounds through a cultural vocabulary that conjured the dignity of our human irreducibility. By the 1970s, the Chilean Escena de Avanzada, for example, had several women artists who developed a new poetics of the image through new medias and especially through collages, newspaper clippings, weavings that found value in the cut, fragments, and splits.

These works interlocked ideas of marginality and borderline practices to become a space for interrogating the symbolic effects of power while encoding acts of civil disobedience. One of its most prominent figures, Catalina Parra, introduced handiwork to her art practice and elevated stitching, embroidery, newspaper collage, and other “crafts” practices linked to domestic activity and popular folk art to resignify that which is made by hand, especially female hands. By evidencing the “seams,” Parra loomed together what Colombian artist Doris Salcedo has described as the conversion of the forgotten into a present, and more precisely, into a presence, establishing an inescapable relationship between spectators as witnesses of the domestic in the work of art. The sewing skills of women are powerfully employed to disarticulate and dismantle dominant and normative discourses.

Fernández’s Flowers for an Empty Grave is such an example. The stitched, punctured, and fragmented delineation of the three flowers can be seen as a reconstruction of the narratives of numerous immigrants that struggle to expand the limits of their existences, while in search of a more dignified life across the border. These simultaneously fragile and intrepid flowers evoke the memory of the disappeared bodies as well as those who managed to survive. Fernández transforms these trajectories in symbolic presences that immortalize, dignify, and confer visibility to stories of erasures and transformations.

Crossings/Mojandosé: Works by Sandra C. Fernandéz is on view through May 27th. Come visit us! The Doug Adams Gallery will be closed Tuesday, May 24th and Thursday May 26th. We will re-open on Friday, May 27th.

[2] The term “fugitive identities” was used by cultural critic Nelly Richard to refer to the oeuvre of women artists during the military dictatorship in Chile. Richard’s article was featured in WACK! Art and the Feminist Revolution, an exhibition catalog for the international survey of feminist art from the 1960s and 1970s curated by Cornelia Butler, at MOCA, in 2007.

[4] You can read more about the artist here http://www.latimes.com/local/la-me-outthere4apr04-story.html

There was an error retrieving images from Instagram. An attempt will be remade in a few minutes.