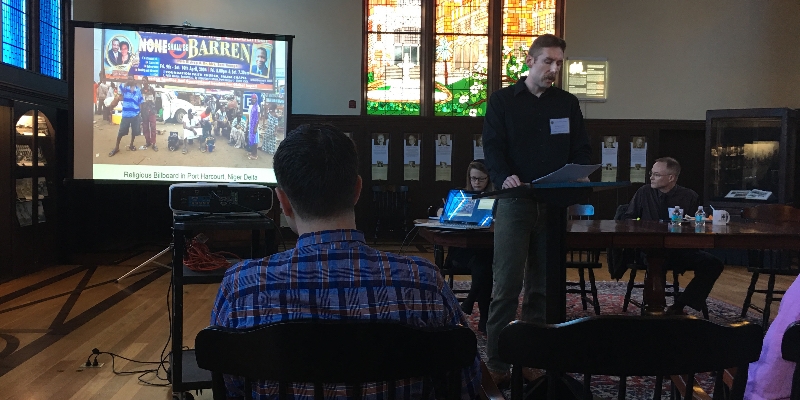 I recently had the opportunity to participate in the 16th annual Graduate Student Conference on Religion at Florida State University, with the following being my thoughts on the event and what I took away from it.  The conference took place between February 17-19, 2017 at FSU in Tallahassee, Florida and the theme was “Religion & Conflict”. People interpreted this idea in many different ways and the lectures I attended detailed just some of the various intersections of religion and politics or violence that have existed throughout world history.

The keynote speaker was Dr. J. Kameron Carter, a professor of Theology at Duke University Divinity School.  His opening night presentation focused on a poem by M. NourbeSe Philip entitled Zong.  The name comes from that of a late 18th century slave ship and an event in which the crew callously tossed hundreds of Africans overboard when disease broke out on the journey from West Africa to the Caribbean.  Dr. Carter raised the historical account as an example of how slaves were not viewed purely as merchandise and that the murder of so many individuals was never raised in the contemporary legal case where the financial backers of the Zong sought retribution from insurance companies for their lost cargo.  In the poem NourbeSe Philip has rearranged and omitted words from the original court transcript to establish a myriad of new meanings.  Carter discussed how the spaces left between words reflect the “silences” of the lost Africans as well as create a visual rhythm on the page that mirrors the ocean they were abandoned to.  The religious conflict in this case stems from some of the white crew recording their anxiety over their Christian versus professional duties, and Carter’s view of the colonial slavers as devoid of any true faith as displayed by their hypocritical practices of slave-trading and outright homicide.

The student lectures were divided into thematic groups, with my own panel being “Indigenous Religion & Policy”.  My paper Traditional Belief & Ethnicity in the Oil Politics of the Niger Delta focused on rebel groups that have appropriated aspects of traditional warrior cults and bush spirits that grant them protection and potency in their conflicts with the Nigerian government.  These male youth amalgamate features of traditional indigenous religious ideologies to their own purposes as they seek to gain control of oil revenues, that while exclusively generated in their own region are siphoned off by the federal government and the three ethnic majorities of the country.  The other presenter, Andrea Renee Dyehouse from FSU, spoke about religious education in Apartheid and Post-Apartheid South Africa, detailing how earlier conversion to Christianity was a pre-requisite for receiving a state education and at the expense of African Indigenous Religions.  The concept of having to sacrifice one’s personal theology in order to function within the race-driven regime of the former South Africa was contrasted against the contemporary national practice in which only 0.5% of a student’s curriculum tackles religion in any fashion.  Rather than confront the privileging of Christianity in previous periods, the post-1994 government seems to have avoided the topic all together.

Another lecture that was particularly relevant was by Jacob Lollar, also from FSU.  His paper Make Edessa Great Again discussed how refugees in the fourth century C.E. Mesopotamian city of Edessa adapted to their struggles by turning to their faiths, and that in general people turn to tradition and religion in times of crisis.  The title of the presentation as well as his closing line (delivered with apt showmanship) adapts President Trump’s campaign slogan to a political end opposite of what the candidate had intended.  Lollar argues that refugees actually advanced the progress of Edessa, contrary to some American fears that refugees would only harbor terrorism or otherwise destabilize myths of what this country is.  Likewise, it is difficult to shirk current events in discussing the conference as several international presenters whose scholarship concerns aspects of Islam chose not to attend in light of the President’s recent travel ban.  Driving around northern Florida and being confronted with more churches and religious billboards in one week than the average Californian likely sees in one year also serves as a reminder that it is important to consider how the diverse regions of the United States might view some of these ideas in very different ways.  Dialogues like those generated by the conference seem to be a good approach towards the creation of more mutual understanding and deeper reflection, but ultimately the issues surrounding religion and the conflicts it generates are clearly continuing motifs in the longer human drama.

One thought on “Religion & Conflict”

Calligraphy Workshop
The Madrasa-Midrasha Summer Institute 2022
Film Screening with Dr. Naomi Seidman
Grief, Healing, and Dance Monday, May 30 | 3-5pm | 2368 LeConte Ave.   CARe is delighted to announce an exciting upcoming event with our Dance Scholar in Residence, Dr. Alexander H. Schwan, Postdoctoral Research Fellow at the Institute of Theater Studies at Freie Universität Berlin and Visiting Scholar at the Berkeley Center for the Study of Religion.
We've been sprucing up the CARe website and want to draw your attention to a recently-added section!
The biblical Song of Songs has often been interpreted as poetry about divine love. It is also unquestionably and universally human because its luminous celebration of love is constantly tinged with the shadow of death and defeat. Nowhere is this more evident than in the brave confession of faith that stands as the text’s climax: “Love is strong as death, passion fierce as the grave.”