“Where are they now?” is a new series, following the recent work of artists who have been displayed in the Doug Adams Gallery over the years. This is the third post in the series. New posts are published every Friday morning!

Since 1999, Richard and Judith Lang have focused their attention on just 1000 yards of tide line where they have collected plastic washing ashore on Kehoe Beach in the Point Reyes National Seashore. They carefully collect and organize these recovered artifacts into arresting artworks that address our throwaway culture and our shared resposibility for environmental stewardship. The Doug Adams Gallery was delighted to showcase Richard and Judith’s work in 2015, as part of the series, Mining the Collection. On display were large-scale prints of distinctive arrangements of plastic fragments as well as an installation made from plastic water bottles.

In the three years since exhibiting at the Doug Adams Gallery, Richard and Judith have – for better or for worse – continued to have ample access to their primary medium. As Judith says, “since plastic, tons of it, continues to wash in, there is no scarcity of art supplies.” They have been chronicling their adventures on and off the beach in a number of blogs, which Judith says also have the storytelling quality that is so present in their work. One of these, Forever Plastic, was created in conjunction with Finding Meaning in the Mess to serve as a dedicated place where the artworks and installation could live beyond the duration of the exhibition.

While the pair are officially retired, they prefer to describe it as “working from home”. This has given them each more time in their individual studios to continue working on personal projects. Richard is chronicling his memoirs on his blog, 90:ojime. Judith, meanwhile has recently produced the sculpture Audit, created from shredded bank statements, receipts and other paper evidence of personal information.

Richard and Judith welcome visitors to their home/studio and have hosted two GTU classes in 2016 and 2017. These visits, led by Assistant Professor of American Studies, Religion and Literature, Dr. Devin Zuber and CARe Student Advisory Board member Yohana Junker, have involved walks on Kehoe Beach picking up plastic and conversations about both the state of political affairs and the state of the environment. Read more about these class visits on the Plastic Forever blog. 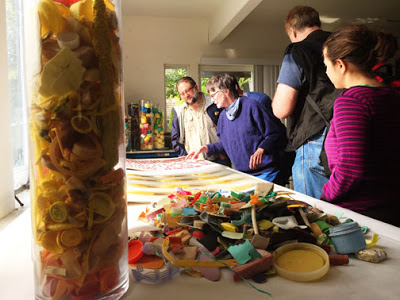 In February 2018, the Langs attended the Inspire Film Festival in The Woodlands, Texas, for the screening of One Beach Plastic, a short film about their work. They were also part of a Q&A session for the film and presented a hands-on workshop with the Arts Council. The film had a profound effect on one audience member, Dawn Caldwell, a sixth grade science teacher, who took Richard and Judith’s story to heart. Her class has since developed the “Lunchroom Plastic” project, which allows students to “curate” plastic left over from school lunches. The artworks created were auctioned and the students managed to raise $850 that will be donated to the Periwinkle Foundation’s Arts in Medicine Program at Texas Children’s Hospital.

Although 2021 still seems far way, Judith says she knows how time flies. In association with a group of multi-media based artists, Richard and Judith are planning “Extraction 2021,” an international multi-venue exhibition. They are working on The Plasticene Discontinuity that will explain the equation of oil = plastic to pair their fossil fuel beach artifacts with geologic fossils. With this project they hope to raise awareness of the fact that every year thousands of barrels of oil and natural gas are extracted and used to make the very plastic that then washes up on beaches and coastlines around the world.

Thank you, Richard and Judith for keeping us updated on your work! We can’t wait to see what you do next!

There was an error retrieving images from Instagram. An attempt will be remade in a few minutes.